skip to main | skip to sidebar

Sweetness and Light that would be awesome:

If Novak is right, Republicans have a marvelous win-win national strategy that is sure to resound with an overwhelming majority of conservatives and moderates who are expressing displeasure with their elected officials:

“Vote Republican and not only do you prevent Nancy Pelosi from becoming Speaker of the House, but you will also be assisting in her termination as Minority Leader.”

Can you think of anything that will better energize the Republican base than the thought of demoting this woman from her current position of power?

Posted by atheistika at 5:33 PM No comments:

verb: To have been exposed as a liar.

Just helping out the left side of the blogosphere, they seem to have a hard time understanding the clear explanation of what being swiftboated means.
Posted by atheistika at 2:13 PM No comments:

I had to share this little bit of beauty:

It is down in the comments section on this post:
http://www.proteinwisdom.com/index.php/weblog/entry/20589/

Holy frijolies! Not much liberalness in this atheist...

How Liberal Or Conservative Are You?
Posted by atheistika at 5:14 PM No comments: 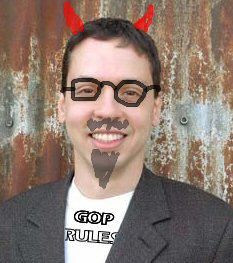 That's what he is.

Sorry to offend anyone.
(not by my words, but by the picture at right)
Posted by atheistika at 3:31 PM No comments:

Political Correctness — The Revenge of Marxism

Great post on the lingering evil that is "stealth" socialism.

Socialism is de-humanizing and just a horrible ism.

"Maybe Socialism is a bit like the flu: It keeps mutating, and as soon as your immune system has defeated one strain, it changes just enough so that your body does not recognize it and then mounts another attack."

indeed
Posted by atheistika at 3:33 PM No comments:

Posted by atheistika at 4:05 PM No comments:

So I found a very interesting Video blogging site by Michael Verdi, the design is a great minimalist style and the vblog entries were very interesting. One that really peaked my interest was a rant on "W" stickers on other peoples cars.

I felt it worth a response.

Here is my response to his, almost poetry, rant.

stealing the election of 2000.
-fairly well proven that the Florida election, had it been recounted as many times as you wanted, would have ended up a George Bush victory.

Enron??!!
-How the hell do you pin that on W? Enron was a festering cesspool of theft for YEARS, it only exploded under W's watch. If anything you need to give the Justice department CREDIT for bringing them to justice now.

Bin Laden determined to attack the US?
- come on, don't be naive, that had nothing to do with W. Bin Laden and the other haters in Islam had it in for us LOOONNNG before W took office.

Patriot act.
- That has impacted me and you how...........I see Michael Verdi.com is being supressed by the government.

Preemptive war Afghanastan
- I'll fix it for you, Kicking the Taliban's ASS in Afghanastan and freeing 15 million people from religious fanatics.

The Iraq war
- Nobody, including W, said it was going to be a short war, nor an easy one, nor a bloodless one. He has always said this was a LONG commitment. The jury's gonna be out for another 5 years.

No WMD's
- Well they found chemical weapons, but I guess they don't count. And there were many other reasons, specifically cited by W in the same speech that included the WMD statement, but then that goes against the script now doesn't it...read up and find the facts: http://www.opinionjournal.com/extra/?id=110007540

Valerie Plame
- Pointless non-secret secret agent that was non-outed outed by someone, to people that already knew she worked for the CIA and who may have had an agenda (her husband certainly did) against the President. Let's throw as much mud against the wall as we can and see what sticks. Sheesh.

......wow I'm not going to be able to answer all of these too many, bare with me if I miss a couple.

Corporate tax cuts ?
-well they kinda brought us out of a recession if you didn't notice.

Kyoto accord is a joke. Un-meetable goals, agenda driven legislation that does NOTHING to combat global warming. Only makes Europe and liberals happy because it is a piece of paper that they can wave in front of the US president and call him names. You aren't seriously supporting Kyoto are you? Seriously?? Even the signors now admit they won't be able to meet the goals. Bush (really the Senate that voted unanimously to reject it) were just smart enough to realize how stupid the Kyoto treaty really was.

Downing street memo...gave us new information that wasn't already known by everyone and that was...wait...gimme a minute...I know there has to be something...oh wait nope.

Well mission accomplished he probably regrets and has recently said so.

Global warming does exist, but not nearly to the degree that scare tactic ALGOR wants us to believe. You ready for Nuclear Power? It is really the only short term (decades) solution.

John Bolton KICKS ASS! Perfect man for the job. I feel he can do nothing to fix the completely corrupted and pointless UN, but at least he can keep a light shined on there shadow filled corners.

Record job losses?
-You mean the ones from the 2000-2003 right? The ones caused by the recession brought on by the .com bust right? Do you mention the robust job growth for three years since? who do you BLAME for that?

Abu Graib sucks.
- but the soldiers responsible were brought to justice...is THAT a good thing or a bad thing?

And I love how you say this...Huricane KATRINA!! Wow, that is awesome. So an inept Mayor, an inept governor had nothing to do with it. A category 3 (almost 4) hurricane hitting a major US city was something that should be easy to deal with? The largest domestic rescue operation successfully carried out by the coast gaurd was bad or good?...I still can't believe they re-elected Nagin, bunch of poor decision making people there IMHO. Again, get off the script: http://www.popularmechanics.com/science/earth/2315076.html

Domestic (er...with a foreign end point of the call) spying. - pretty clearly falls under the executive's allowable powers: I hate to keep pulling you off your script, http://powerlineblog.com/archives/012631.php#012631

2500 coalition troops dead...tragic... but 1. the soldiers feel the risk is worth it, 2. compared to almost any war ever fought it is miniscule.

over 100k iraqis dead...umm...that dang script thing again. There is no way to make this a good thing, but it is probably less than half that. About the only silver linings are these: a) Sadam wouild have probably killed a significant percentage of that number himself in 3 years (historically he was a butcher) and b) most of the deaths are at the hands of islamic homicide bombers, exposing their hate of anything and everything, even other muslims.

All out civil war?
- There is a lot of violence there, but I'll counter your all out civil war with "three elections and a sitting democratically elected government"...I think the truth is probably somewhere in between...Let's see how things go for another 5 years. (that's the time frame it's gonna take)
I probably missed a couple there, but I think I caught most of them.

Anyways. Just for the record I do NOT have a W sticker on my car. And one last comment...I shake my head when I see Kerry stickers on cars still...THAT is a deluded individual.
Posted by atheistika at 3:06 PM 2 comments:

Atheism and its Allies.

In this world, a world filled with people who believe in god, there are certain facts that must be understood.

1. I am not going to change the religious beliefs of anyone. They are too tightly held to the psyche of the individual. Only the individual can do that.

2. If I believe that I can't change someone's religion, then it follows that a movement, for example the atheist movement, can't make a broad change in society.

There is simply too much momentum in the world to change much.

If I accept that, which I do, then what are my options as a logical atheist?

To me the most clear choice is to understand the worldwide religions and ally myself with the one most conducive to allowing me to live my life as I see fit. Well, which one is that? Or a better question is which one is it not?

It is not Islam.

But under christian, jewish, hindu, buddhist, and others I would have not problem. Only under Islam would I be killed for my views.

I choose to ally with the good guys, the ones whose general tenets align with humanist viewpoints to the bullet point. The only difference is the praying-to-a-higher-power thing. Well to each his own.

I will have more on this later.